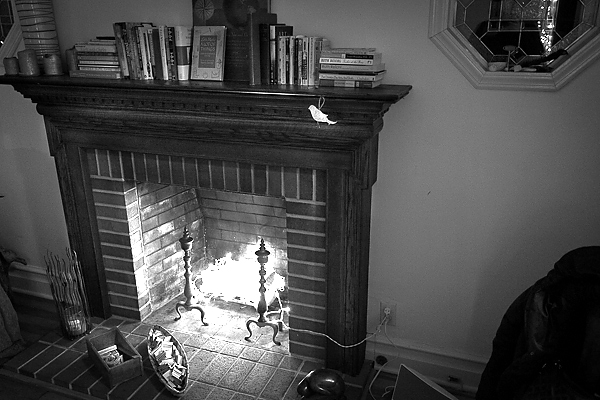 Midway through their Fall 2012 semester, GMU Arts Management classmates Sarah Cofﬁn, Christine Bauer, Henri Bielawski discovered they shared a similar dilemma: the struggle to find a balance between their artistic inclinations and management pursuits. Although they were dedicated to learning the skills to become future art administrators, there was a moment of truth where they felt their own personal artistic expressions were becoming increasingly neglected. Soon thereafter, something unexpected happened…

Sarah’s cousins, who currently live in Africa, had just purchased a small bungalow in the Del Ray neighborhood of Alexandria, VA, and asked if she would consider house sitting until they relocated to the States later in the summer. To sweeten the deal, they agreed to allow Sarah to host artistic gatherings there. It was an idea Sarah had to offer like-minded individuals, who longed to engage in communal creative activity, a place to share and to experience the artistic process with others.

When Sarah originally applied to GMU’s Arts Management program, she wrote in her personal statement that it was her goal to create an artistic community oriented around opening one’s senses to experience the world. Suddenly, the circumstances were in place to put her ambition to practice and to apply her learning in a real-world situation while still working towards her degree. Upon hearing about the proposal, Professor Claire Huschle encouraged Sarah to pursue the project as an independent study, and The Empty House Studio (TEHS) was born. 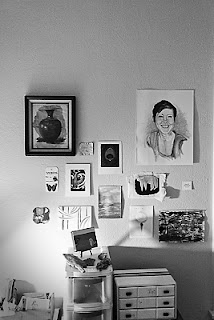 Sarah, along with Christine and Henri, began work on the TEHS’ mission statement and quickly launched both a blog site and Facebook page. Within a relatively short time they had one hundred “Likes”; an amount which has more than doubled as word spread beyond their immediate circle of friends. Beginning in mid-December, TEHS hosted its first of many on-going weekly events. While some of these gatherings have been based on a theme, such as culinary creations or salsa dance, many are unstructured and simply encourage people to show up and be open to new experiences.

During these happenings a trained musician might find new inspiration by experimenting with painting, or a writer might try collage to stimulate a new story idea. The nurturing environment cultivated by TEHS has become a conduit for creativity in all forms, and one feels the palpable energy as a buzz of activity fills the rooms. Many who come for the first time return again as regulars, and each subsequent gathering presents a new opportunity for someone else to join and connect.

This coming June, TEHS will vacate its Del Ray address as Sarah’s relatives return to the US. What happens next has yet to be determined. Whether moving on to inhabit a new physical location, or perhaps, instead, becoming a framework for alternative creative endeavors, TEHS has already instilled in many the spirit of being in of the moment. The message is clear: for those interested in sharing a creative experience with others, now is the time! 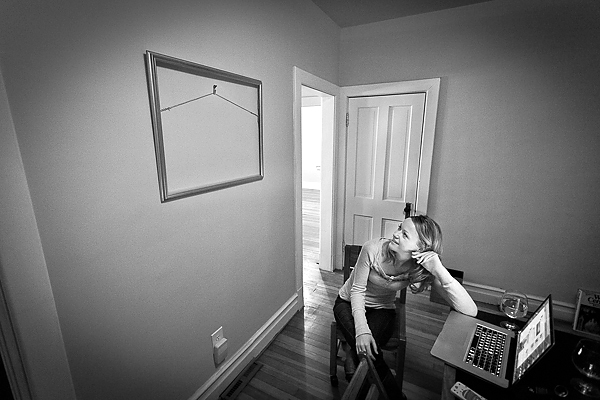 Thank you so much for an amazing 6 months back in 2012 and 2013. We reached our planned termination in June of 2013 with a myriad of experiences, new friends, and reflections swimming in our dreams. We are coming to our 2nd anniversary of finishing TEHS (June 2015) and I'm still sifting through the explosion of ideas and interaction we all had.

I spent all of 2014 abroad, collecting more ideas, meeting more makers, and seeing more creative spaces and communities. As The Empty House Studio idea settles, I am anxious to do more work and experiments related to makers community building, inclusive creativity, and the creative use of spaces.

Any thoughts or reflections you've had since TEHS ended would be much appreciated. Comment below, message our Facebook page, or email us at theemptyhousestudio@gmail.com.

Sincerely,
Sarah (for The Empty House team)
Posted by Sarah Coffin No comments:

The PIxie and the Scout, or, Love in the Age of Restaurants

(A guest post from one of the diners at The Pixie and The Scout. You can find more of his writing on his blog, He Feasts!)

The difference between love and dinner is barely discernable under the right circumstances. If you were one of the fortunate few who booked a table at the Empty House Studio's recent Pixie and Scout dining event, then you know what I mean and need read no further.

"Menu" is a relatively modern, 19th century word that comes, like most culinary things (except the word "culinary", oddly enough), from France by way of the Latin word for "to diminish." This is a realistic assessment of what it means to make a list - an exercise that shrinks the possible to the manageable or relevant. We're accustomed to dining out on diminution, and a menu is just as often a taxonomy of limits as it is a positive statement of what the restaurant or the chef can do. We need lists. We need to distinguish in any given day whether we are going to buy groceries or to the moon. Without lists - formal or informal ones - we might hope for everything and accomplish nothing. But Jonathan and Katie Hittinger (the creative geniuses behind the Pixie and Scout dinner) turned the idea of a menu into a creative exercise that made limitations into gastronomical liberties.

Bread and olives were the only things that came out to us unbidden. The bread - a handcrafted sour dough that deserves a poem written about it - was loosely torn into pieces and lay tumbled around a large wooden platter, interspersed with whole roasted garlic bulbs and herb laced goat cheese. This was delivered to our table along with what would under any other circumstances be considered a menu. It was a laminated sheet which was part quiz, part questionnaire, part doodle pad. The instructions for the food and the menu were the same - engage. And so we did. Bare handed and at once, we were tearing off hunks of bread, mashing the roasted garlic and cheese and jointly filling out our menu. 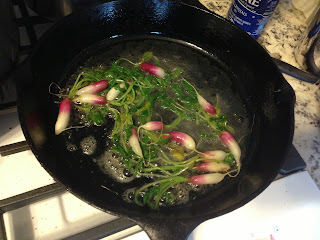 Being served by chefs with professional backgrounds that include Blue Hill and Parm in New York City, guests were prepared (in a BYOB environment) for fresh and seasonal food - and our table alone had stocked up for the adventure with Pilsners, IPAs, Saisons, a Dubbel and a handful of clever white wines. We were ready for anything - which turned out to be fortunate. Having drawn a picture of an onion, described our hunger level, mentioned a dairy allergy at the table, and found the right word to describe a ripe strawberry (this was how we filled out our "menu") we surrendered the document, and hunkered down for food.

We hadn't ordered. Not really. Certainly not in the accustomed sense of interacting with a waiter as charming messenger from the kitchen. The folks staffing this event at the Empty House Studio efficiently swept in and out, each of them serving every table. The sense of intimacy was startling. I happen to know Jonathan and Katy, through college and friendship, but I looked around the room and found the same sensibility of theatre in the round to be pervasive at other tables in the small space. Mechanical tolerances of selecting an item and awaiting its timely delivery belonged elsewhere, and restaurants (that one's a French word) were a distant memory. Our table was made up of friends, and effortless conversation moved along with the unpredictable certainty of weather and was woven into our meal. 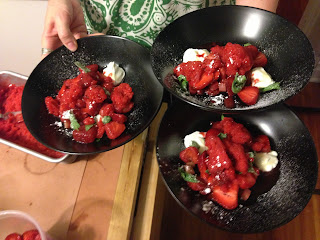 What could I tell you about the food without betraying a confidence? It was flawless, of course, but it came as part of a diners discourse with the kitchen. Soft shelled crabs, calamari, radishes, herbs, chicken, liver pate and over easy eggs. These were responses. The fruits of knowledge. Edible conversation but without a hint of a gimmick.

Love is a curious frontier myth. It is the process of bringing hope and anticipation slowly into line with knowledge and experience. It is both the setting out and the settling down. Food love is something we usually only know at home, or with friends. And many restaurants have labored in vain to replace professionalism with an approximation of this kind of love. But it is a rare thing, and highly valued, to find it working - to truly eat together and be fed.

(You can see more of our pictures from this event on our Facebook page, "The Empty House Studio")
Posted by Sarah Coffin 2 comments:

The Pixie and The Scout 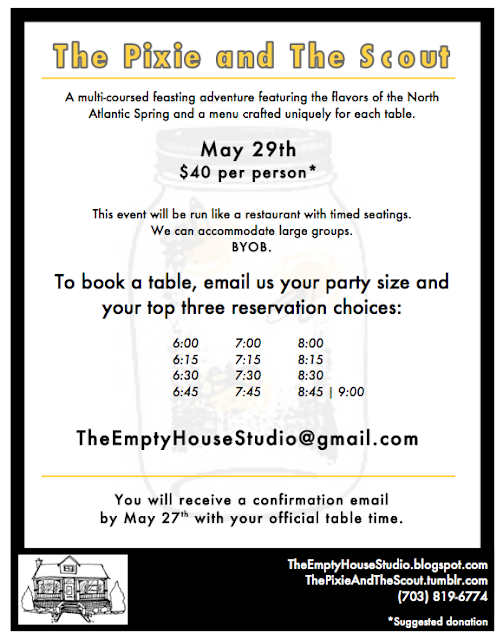 “One cannot think well, love well, sleep well, if one has not dined well.”


We are so looking forward to MAY 29th's dinner!
Are you ready to reserve your spot?
Details coming this week!!

The Evening of Wednesday, May 29th. 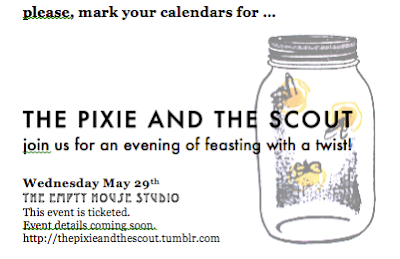 The bathroom is finished!

Well, mostly. I have to frost the window and get the lights fixed... but we're back in business, ladies and gentlemen!

That IS the same bathroom. 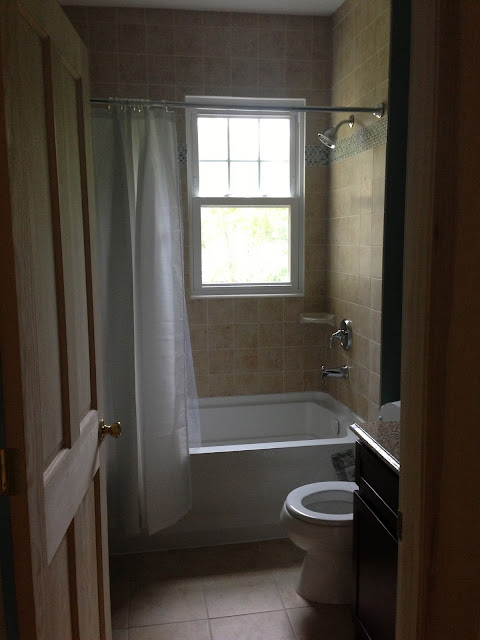